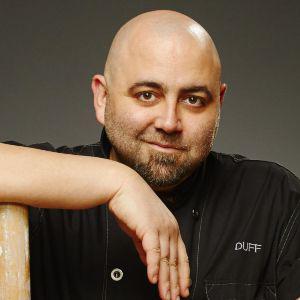 Pastry Chef, TV Personality, Charm City Cakes
Duff Goldman has been at the forefront of the couture cake movement for nearly 15 years with his hit Food Network show Ace of Cakes and renowned bakery, Charm City Cakes. Onstage, Duff speaks about his unconventional start as a chef-artist-entrepreneur-TV host, as well as his recipe for building a team and leading them to success. With an eye-popping collection of photos, illustrations, and memorabilia of his famed cakes, Duff shows that magic can happen when creativity is king and “no limits” is the mantra. Ace of Cakes revolved around Duff and the elegant, outlandish, one-of-a-kind, edible masterpieces created at Charm City Cakes. A graduate of the Culinary Institute of America in Napa Valley, Duff opened Charm City Cakes in Baltimore in 2002. Combining his skills as a classically trained pastry chef, graffiti artist, and metal craftsman, Duff created cakes with sound, smoke, and motorized moving components. He opened Charm City Cakes West in Los Angeles in 2012, and founded Duff’s Cakemix, a DIY cake and cupcake decorating studio, in Los Angeles. His popular cookbooks include Duff Bakes: Think & Bake Like a Pro at Home and Ace of Cakes: Inside the World of Charm City Cakes. He is involved with many charitable organizations including No Kid Hungry, the Make-a-Wish Foundation, St. Jude’s Children’s Research Hospital, and Habitat for Humanity.
Sessions